Traditionally when designing analog or hybrid beamforming solutions for mmWave the design has been targeting a single application. A certain antenna panel/array has been designed for a certain purpose, such as a handheld device, and if another mmWave transceiver architecture is needed for another application that needs more antennae, such as a fixed wireless access point, or a small base station, another larger antenna panel has typically needed to be designed.

The 5G-NR mmWave communication devices range from a simple IoT device, via smartphones and fixed wireless access  points, to devices for non-terrestrial communication as well as base stations. Designing different antenna panels with analog beamforming solutions for each of these use cases comes with a cost.

It would be an advantage to develop a scalable beamforming solution covering several of the use cases above, thereby reducing the development cost and enabling innovation of potential not-yet-known applications (possibly having almost unlimited bandwidth) as is the case in the mmWave radio spectrum.

The above integrated antenna and RF chip, when combined with digital beamforming algorithms that are implemented in the digital baseband processor, can be tailored to a flexible amount of antennae. Thus a scalable, low cost mmWave implementation for various use cases can be achieved by just applying as many RF chips as are needed for the particular use case. For instance, if we consider a mmWave IoT device that is only transmitting a small amount of data over short ranges, then it may only need two RF chips, plus associated SW that handles beamforming, to be configured for connection to two antennae to create such a  device.

A more complex use case relates to a mmWave smartphone implementation. This needs to solve the challenges associated with handheld devices (these have been discussed in previous posts) and therefore need a distributed antenna architecture with, say, 8-16 Antennas and RF chips, with the corresponding digital beamforming  algorithms adapted to that amount of antennae. Considering even more complexity, such as a Fixed Wireless Access Point, then 32-64 RF chips may be needed so as to achieve the desired data rate (several Gb/s).

The same set of mmW RF chips are reused for all types of devices. However, in order to meet any requirements for higher transmitting power and better receiver sensitivity, typical for more advanced use cases, then these are solved by adding more RF chips. The level of scaling can also continue to  base stations, devices used for non-terrestrial communications such as drones and aeroplanes (requiring 100+ antennae) and to devices communicating with satellites (1000+ antennae). One can even imagine extending the scaling idea of digital beamforming radio architectures to inter-planetary and interstellar communication, where the number of antennae in these cases need to be in the range of hundreds of thousands to hundreds of millions of antennae. However, there might be some challenges with the 5G latency requirements in the communication that need to be solved as well 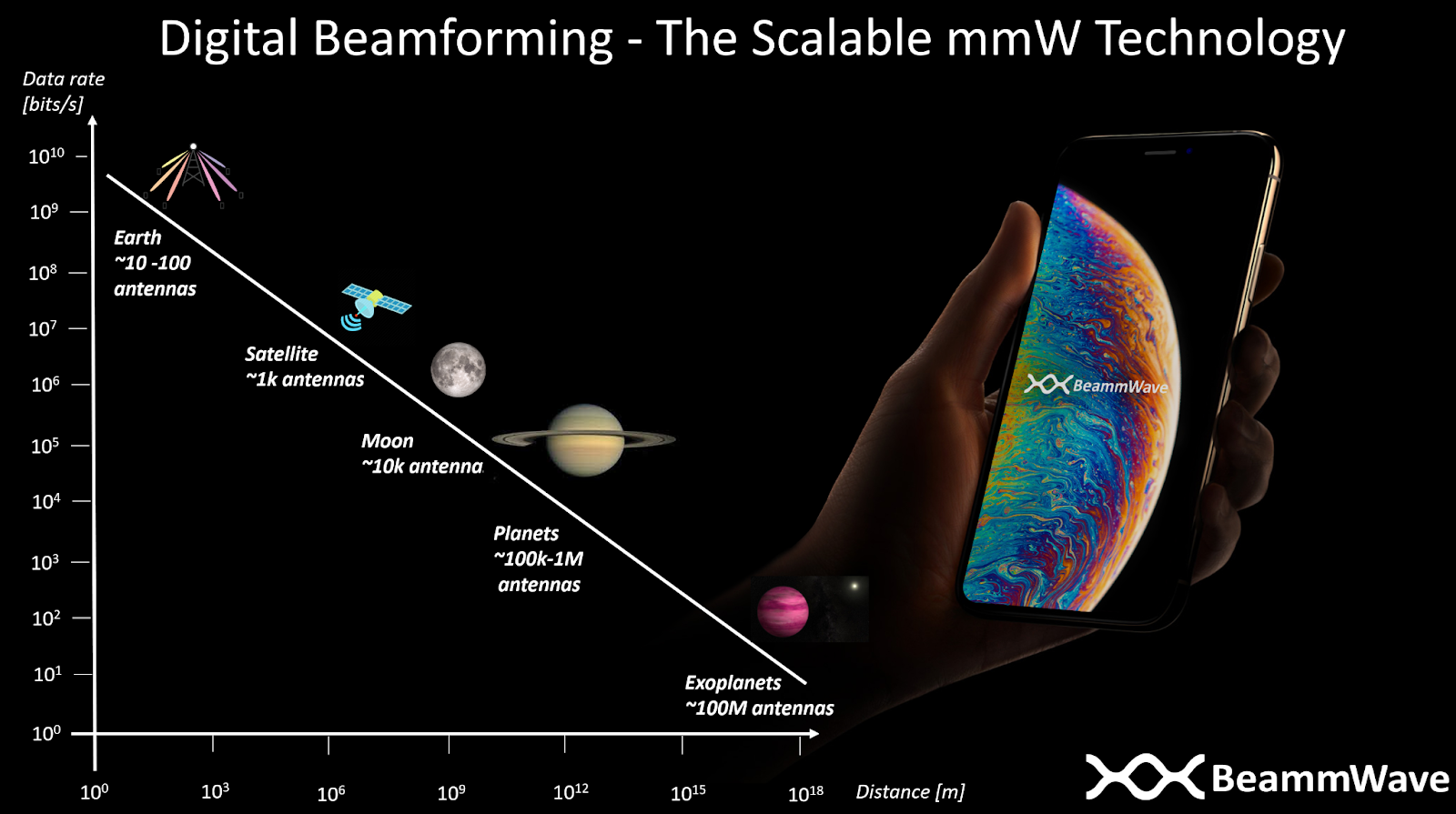 BeammWave develops a scalable digital beamforming architecture enabling the mmWave mass market on earth as well as in the sky.

Thanks to the tremendous technology development in the semiconductor industry, where the number of transistors per mm2 has increased by a factor of around 700,000 times in the last 50 years, the smartphones of today have close to 140,000 times more processing power than the onboard computer in the lunar module of Apollo 11 had in July 1969 when Neil Armstrong and Buzz Aldrin landed on the moon.

The evolution of semiconductor technology has until recently continuously followed Moore’s law (a statement by the Intel founder Gordon Moore, made in 1965, that the number of transistors on a die will double every 18-24 months). The process behind this evolution has been referred to as scaling i.e. advanced miniaturisation. With recent semiconductor technologies coming closer to the size of atoms, and pure scaling no longer possible, it had been predicted that semiconductor technology development would slow down. However, new innovative technologies which allow transistors to be stacked in both two and three dimensions have allowed technology development to continue at a significant pace. That situation is expected to continue well into the next decade as well.

When we consider wireless mmWave communication there are some parts in the analog domain of the radio that are bound by the laws of nature. For instance, when using analog or hybrid beamforming there is a need for analog phase shifters. These comprise of switches and various physical routings of conductors/wires on a PCB. Such elements are necessary in order to delay the signal and thereby ensure the coherent combining (referred to as beamforming) of signals received or transmitted from their respective antenna. Since the length of the wires in the phase shifters are directly proportional to the signal wavelength they cannot be scaled using more advanced RF technologies. That impediment to adopting advanced semiconductor technology is not the case in a digital beamforming radio architecture. Here the beamforming of signals is made in the digital domain and can therefore be scaled in size, resulting in enhanced performance, with more advanced semiconductor technologies.

BeammWave delivers a sustainable and scalable digital beamforming solution that will follow the technology progress of the semiconductors not only for the 5G era but also for the forthcoming 6G technologies.